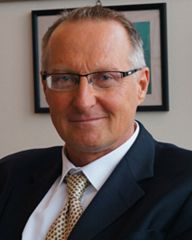 In 1983 Andrej Motyl graduated from the Faculty of Law at the University in Zurich. He was a delegate of the International Committee of the Red Cross. He worked as a lawyer in a law firm and later in the Swiss Department of Foreign Affairs. After a short diplomatic mission in the I Political Department he worked for a short time in Rabat and later he was seconded to Lagos. In May 1992 he was sent to Moscow and in 1994 to Teheran, where he took up a position of Deputy Ambassador. At the end of 1997 he held the same position in the Embassy in Tashkent. At the beginning of 1999 he came back to Bern and was sent for a peace project to Afghanistan by II Political Department. After his return, he was working shortly at the Federal Department of Defence, Civil Protection and Sports. In the mid of 2001 he was working again in the Department of Foreign Affairs as chargé d’affaires a.i. in Skopje. In September 2001 he was sent as the Deputy Head of Mission to Nairobi and in April 2004 he took up the same position in Tel Aviv. From September 2007 Andrej Motyl was the Ambassador in Khartoum and from August 2011 in Hanoi. Since August 2015 he has been the Ambassador of Switzerland to Poland.